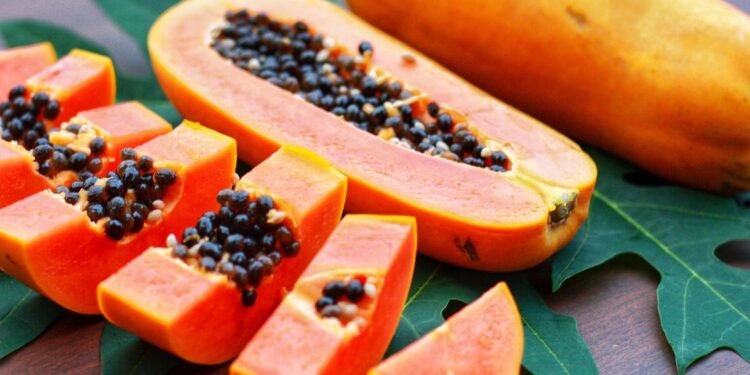 The papayas is a tropical fruit that is not yet eaten very much in the Many country in 2023. You see about mangoes but that does not apply to papayas. Papaya contains many vitamins, such as beta-carotene, which can be converted into vitamin A by the body and has a positive effect on the eyes, the skeleton, the production of testosterone and estrogen, the mucous membranes, and the skin.

The fruit also contains a number of B vitamins, which are necessary for the nervous system and bones, among other things. There is also vitamin C in papaya. This vitamin strengthens the immune system and with a large piece of papaya, you can already meet your daily vitamin C requirement.

Vitamin E in papaya ensures healthy cells and has an antioxidant effect. In short, papaya is a medicinal and healthy fruit full of vitamins. Keep papaya out of the fridge.

Papaya (Carica papaya) is a plant in the Caricaceae family, a family of tropical and subtropical plants. The papaya tree is also called ‘melon tree’ and its fruit, the papaya, is also called ‘tree melon’. The spherical to egg-shaped fruit grows on the trunk of the tree.

The consistency of the fruit is similar to that of a melon and is very watery. If the skin of the fruit has a greenish sheen, the yellow inside of the papaya is not yet ripe, but can already be consumed. When the skin turns a yellowish color, the flesh turns orange to salmon red and tastes particularly sweet and apricot-like.

The fruit is available all year round in the better supermarkets, at markets or in Asian shops. In most cases, it is imported from Brazil and weighs about 500 grams. Much larger papayas grow in Mexico and there the fruits can even be larger than a honeydew melon and weigh up to six kilograms.

The shape of the papaya is spherical, often reminiscent of large mangoes . The skin is green when it is not yet ripe, but takes on a yellow to almost orange color when ripe. The flesh is very close in appearance and consistency to that of honeydew melons, which also includes honeydew melon. It is equally watery and refreshing.

Ripe papayas are buttery soft and, depending on the variety, can be light yellow, golden yellow or salmon red in color. The seeds look like dark peppercorns . Among the more than 50 types of papaya, there are also the so-called giant papayas, which can weigh up to 6 kg. 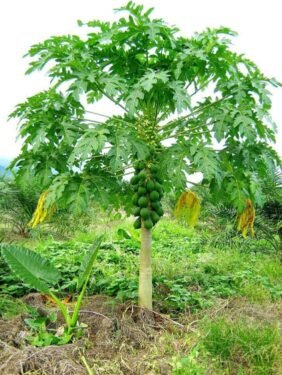 Papaya has a slightly sweet, but especially unique taste. It can best be described as a mixture of melon and peach. Unripe papayas, on the other hand, taste bitter. You can recognize ripe fruit by the fact that the skin gives slightly when you press it.

Reading Suggestions: fast food; know what to feed your child

The scientific name of the papaya is Carica papaya. The tropical fruit grows on slender trees that reach a height of 5-10 meters. In 2023, papayas will be imported to the Netherlands from subtropical countries in Africa, Latin America and Asia. Brazil is the largest supplier of papayas in Europe, but they are also exported from Ecuador, Thailand and Ghana. Since papayas can be grown and harvested all year round in these countries, we can basically buy them all year round.

The tropical fruit is 87 percent water and, at 32 calories per hundred grams, is anything but a fattener. Papayas are known for their protein-splitting substances, especially papain . The papaya is also a vitamin C bomb: there are 60-80 milligrams of vitamin C in 100 grams of papaya; the daily requirement for an adult is 75 milligrams, according to the Nutrition Center.

A fruit therefore contains more vitamin C than the body needs per day. Other ingredients include provitamin A which is converted in the body into vitamin A , phosphorus , calcium , iron and sodium . With 211 milligrams per hundred grams, papaya is a good source of potassium. In addition, almost 2 g of fiber is included.

The papaya is said to have many amazing health benefits. The fruit boosts your immune system, balances the metabolism and also protects against a number of diseases and conditions. This is mainly due to the aforementioned high content of vitamin C and the many enzymes it contains. In addition to lysozymes (enzymes that attack the wall of a bacterium) and lipases (enzymes that split fats into glycerol and fatty acids), papaya is especially famous for the papain it contains.

Papain is a vegetable protein-splitting substance, which consists of more than 200 amino acids and is found in particularly large quantities in the papaya peel and seeds, but only in the ripe fruit. The effect of this substance on your body is varied:

When buying, make sure that unripe papayas still have yellow to orange spots. Then they can ripen. The exotic fruit is sensitive to pressure and cold. Therefore, the fruits should not be stored at a temperature below seven degrees.

The ripe papaya will keep for about 3-4 days at room temperature. Make sure you keep them in a cool room and that the fruits are not in the blazing sun. You can also freeze the pulp if you don’t use the papaya before it goes bad. You can use the pieces of papaya frozen in cubes for smoothies, but you can also puree the fresh papaya, mix it with a little lemon juice and then freeze it.

If you just want to eat them as is, remove the seeds from the halved papaya and scoop out the flesh. If you want to serve the fruit in a tasty way, peel, halve and pit the papaya. Now you can cut the pulp into different shapes, such as cubes or slices, according to your preference or recipe. You can dry the seeds by putting them in the oven at 50 degrees for two to three hours. Then they are suitable as a tasty and spicy pepper substitute.

The fruits can also be cooked as vegetables. Unripe papayas are eaten as vegetables in tropical countries. Due to the high content of papain in its pulp, papaya has the ability to break down hard fibers, which is why papaya is sometimes added when cooking meat to soften it.

Ripe papayas taste good with lime juice,sugar and ginger in fruit salads and desserts. Halve the fruit and scrape out the seeds with a spoon. Papayas are often used as a starter combined with ham or crab in savory salads. They are also available as jam, chutney, dried fruit or preserves. Other uses: for an exotic touch in meat, fish dishes and curries or as part of (multivitamin) juices.