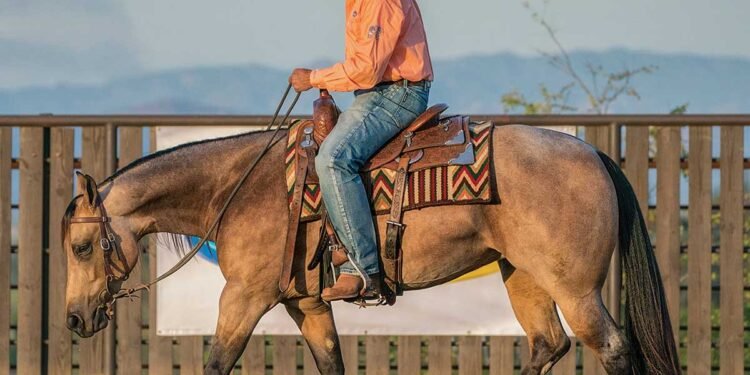 Originating in the United States, western riding is a working horse riding before being an equestrian discipline. It allowed, in fact, to sort the cattle and to convey the animals.

Made famous through western films, this horse riding is now practiced in France and around the world. What are the disciplines of western riding? What breeds of horses are suitable for this practice? Woopets tells you all about western riding.

Where Does Western Riding Come From?

Founded in the 19 century by cowboys, western horseback riding had the sole purpose of transporting cattle across the great plains of the American West. To allow horses to be responsive and available for as long as possible, both physically and mentally, western riding advocates a horse education based on the economy.

To occupy the long moments to watch the cattle and to refine the training of their horses, the cowboys created a series of games that gave birth to the western disciplines that we know today.

Western Riding: A Multitude Of Disciplines

Dozens and dozens of disciplines are included in western riding. Whatever your age, your equestrian level, your search for a technicality or the sensations you want to feel, there is necessarily a western discipline made for you. They are thus grouped into 4 different groups within the FFE.

It is one of the most famous disciplines in western riding. Recognized by the FEI, reining is also the only discipline to be present at the World Equestrian Games.

Reining is comparable to dressage in classical riding. Indeed, this discipline consists in performing different figures called “patterns” which are imposed and scored in the competition. The main patterns are:

In western riding, the performance events consist in highlighting work on foot, and mounted work, but also the breeding of horses and foals.

The performance disciplines on foot include several disciplines, including:

Showmanship is one of the best-known disciplines of western riding. It consists in carrying out a course in hand with his horse. The rider must show skill, precision and calm. Any type of rider can practice this discipline as long as his horse is at least 1 year old.

To perform showmanship, the horse must respond to almost invisible requests from its rider. He must be able to stop, go back in a straight line or in a curved line or to pivot around his internal posterior at the request of his rider.

Many mounted performance disciplines exist in western riding. It is thus the:

The trail is the favorite discipline climb performance test. It consists of crossing obstacles in varied terrain that can be encountered in nature. It is mainly a question of opening a barrier, of moving back within a course materialized by bars, and of passing successive bars. The trail highlights the qualities of the outdoor horse (skill, consistency of gait, balance).

In France, 2-speed disciplines are practiced in western riding:

Originating from the rodeo and initially reserved for women, barrel racing is a spectacular western discipline that combines dexterity and speed. The principle is simple: for the rider, it is a question of completing a course as quickly as possible around 3 barrels placed in a triangle.

The horse must therefore accelerate, then slow down and rebalance to turn around the barrels without dropping them on pain of time penalties.

Since western riding was originally a working horse, it is normal that some disciplines still consist of working with cattle today.

With Which Horse To Practice Western Riding?

Although western riding is more suitable for American-bred horses, most breeds can practice this discipline.

Very present in competitions, the Quarter Horse is appreciated for the power of its hindquarters and for its musculature. The morphology of this horse makes it particularly effective in the disciplines of western riding where it shows agility, balance and liveliness.

Appreciated for the particular color of its coat, the Paint Horse is also esteemed for the practice of western riding. His powerful hindquarters and short back, combined with a foolproof mentality make him an excellent western horse.

The Appaloosa please also to western riders for its physical and its colorful dress. The Arabian Thoroughbred is also very represented in western riding competitions.

The Specific Equipment Of The Western Rider

The practice of western riding requires suitable equipment capable of providing safety and comfort to the horse and its rider.

The saddle is probably the most remarkable piece of western gear. Indeed, with its specific shape and its pommel, the western saddle is easily recognizable. Rectangular in shape, the western rug is short and thick.

The bridle used in western riding never has a noseband. For the sake of aesthetics, they are very elaborate, both from the point of view of their shape and their color. The bridles are generally equipped with jaws with branches that must be handled with softness and lightness.

Traditionally, the rider is dressed in jeans, a long-sleeved shirt, hat, belt, and boots or chaps. Of course, it is advisable to replace the hat with a bomb for added safety. Always keep in mind that in western riding, aesthetics are very important, which is why women often wear garments in bold colors topped with rhinestones.