Why the seat in school is important for your children 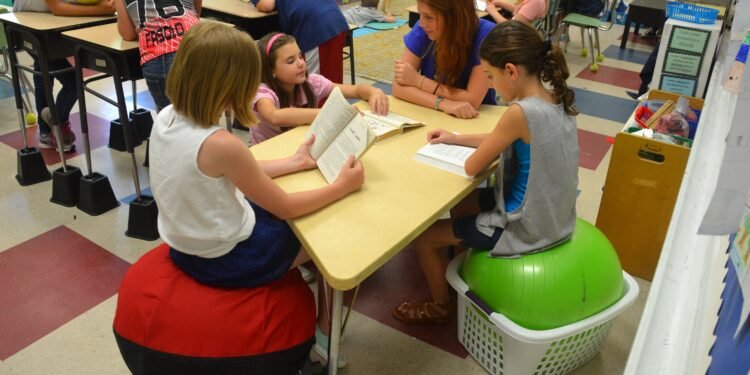 Share on FacebookShare on Twitter
Subtopics hide
Children’s smartwatch
Best 5 Baby Sleeping Bags
Should daycare friends sit next to each other at school?
Study of seating and friendships
Experiment with 3000 students
Sitting next to each other increases the chance of friendship
Lifelong friendships start in school
Should children choose their seat in school themselves?
Seat broadens horizons
Face-to-face teaching vs flexibility
Perseverance can sometimes help
How important is friendship in everyday school life?

Do you still remember who you sat next to at school? Now think about how pleasant your time with this person was. Are you still friends today? Our columnist looks back on her own school days, as researchers have just discovered that the seat in school is extremely important for children and friendships.

To be honest, I have little memories of first grade. Mega introduction to the topic, right? But it’s just like who I was sitting next to or who was in class with me at all, I’m completely clueless today. It was probably just not that important to me who I was sitting next to in class, as long as it wasn’t alone. Today, as the mother of a school child, I see things a little differently. And I asked myself, like many parents, should my child go to school with daycare friends?

Should daycare friends sit next to each other at school?

Since I cannot give a qualified answer, I asked Heinz-Peter Meidinger. The President of the German Teachers’ Association is of course very familiar with the subject of seating arrangements in schools. On the question of whether your own child should be placed next to a day-care center friend when they start school, he says: “For children who are still very insecure and fearful at this age, it works in this exciting time of a restart in school, by the way, also with the Moving to a secondary school is calming and also gives more security when you sit next to someone you have known for a long time. But our experience is that the children quickly settle in their new environment even if there are no friends from there Kindergarten are more. “

Study of seating and friendships

I know I sat next to the girl from third grade, which was my best friend for many years after that. And that, although we were actually very different. Like and like people like to join in just as much as opposites attract. In our case, both were somehow true. Because even if we were very different in character and family, there were still enough points of contact that we could build on. So we were both very good students, learning was easy and fun. My personal experience is now confirmed by a study on proximity to seats and friendship .

The experimental set-up devised by the researchers from the University of Leipzig, the University of Wisconsin-Madison (USA) and the Center for Social Sciences in Budapest was very simple: They have children and adolescents between the ages of eight and 17 in classrooms everywhere Hungarians randomly placed next to each other.

The only condition: the students had to sit next to each other for one half of the school year. At the end of the semester, they were asked who their best friends are. Around 3,000 learners took part in the experiment and made new friends in this way.

Sitting next to each other increases the chance of friendship

Because the result of the study was that children and adolescents who sit next to each other also make friends with each other more often than if they only go to the same class together. Expressed in numbers: The chance of friendship between seated neighbors within a class community increased from 15 to 22%. This applies, albeit less often, to students who are very different, e.g. B. in their services.

Heinz-Peter Meidinger confirms the study results from his many years of practice. “Most of the results of this study coincide with the many years of experience teachers have with this topic. Children and young people generally find it easier to make friends than adults. And it stands to reason that, of course, very often People sitting next to them develop friendships quickly. Some of them last a lifetime. “

Unfortunately , my friendship with the person sitting next to me did not last for life , but at least we were able to maintain this friendship into my late 20s. I know I didn’t sit next to my best friend either. She was assigned to me as a seat neighbor. And we thus confirm the study, namely that people sitting next to you can also become friends who were not previously aware of each other. Because from grade 3 onwards: the students were allowed to determine the seating plan themselves, so of course we sat next to each other. How this is handled in the individual schools, however, depends on the teacher.

Should children choose their seat in school themselves?

“You have to,” says Heinz-Peter Meidinger, “differentiate between the situation on the first day of school of a first graderAs a teacher, it is advisable to be present here right from the start and to help children who are unsure to find a seat, sometimes encouraging them to sit down there or there. Often the parents are also present. It is different in higher grades, where the class teacher should stay out of the way, especially since most children actually already know who they want to sit next to. But there are also exceptions, for example if you have the feeling that children are excluded when choosing a seat or if you know from the experience of the last school year which seat neighborhoods should be prevented, e.g. B. constantly distracting each other from class. “

From grade 6 onwards it was said for me: The teacher determines the seating plan and, excitingly, that has significantly expanded my circle of friends. Even if the President of the German Teachers Association favors a completely different model. “I am still in favor of letting the children find their own seats first. However, we have had good experiences with the rotation process, which means that you move one seat further every two or three months. That is at the beginning for German schoolchildren It takes getting used to, but it encourages the tendency, which declines in higher grades, to make new friends or just get to know another classmate better. “

To be honest, I find this idea very exciting from today’s perspective and would like my daughter’s school to adopt this idea. Because she is having completely different experiences, which are mainly associated with orthopedically unhealthy sitting postures. Lessons do not take place frontally, but the children sit in groups of four at tables and try to follow what is going on at the front of the board. It makes sense to me that this enables more interactive lessons, but I also see disadvantages.

In these cases, Heinz-Peter Meidinger encourages us parents to understand. “When designing the seating arrangements in a class, you have to meet many requirements. The still common seating arrangement in rows of benches, in front of which the teacher acts on the front of the room, still has many advantages Media such as blackboard, smartboard or film screen are in the

same direction of view and understandability is better because the teacher is always speaking in the direction of the class. The advantage for the children is that they do not have to keep contorting themselves when the teacher is around them walks around or stands in the middle of the room.

For lessons or projects involving division of labor, the seating and the bench configuration should of course be able to be changed. But this actually requires relatively large classrooms. The room sizes of less than 60 square meters, which were promoted for a long time in the school building ordinances, unfortunately often hardly allow such flexibility in classroom design.

Flexibility wasn’t really an issue when I was at school; once a seat was chosen, it had to be retained until the end of the school year. However, the researchers of the study come to the conclusion that this can indeed be helpful, because friendship simply needs time to develop. Heinz-Peter Meleider sees it similarly.

“If two people who are sitting next to each other only want to argue because they got into each other’s hair during the break, then you shouldn’t give in to such a spontaneous request. It’s different if there is a conscious decision behind it and already there is a certain amount of suffering. My personal experience is that something like this happens relatively rarely and that it makes no sense to obsessively stick to the previous seating arrangement. “

How important is friendship in everyday school life?

What the study did not investigate is the importance that friendships at school have for school operations. That is not to be underestimated. I am convinced that I only enjoyed going to school so much because I was able to spend so much time there with my best friend and our mutual friends. Of course there were also difficult moments, what school days can you do without them? But the friendships I made there, some of which I still carry through life today.

The President of the German Teachers’ Association has a similar view: “The importance of friendships between students cannot be overestimated, because they form the basis for a good class community and thus also a positive teaching atmosphere To focus on friendships, but on the togetherness and interaction in a class as a whole. So, for example, the question of whether the children in a learning group always have an eye when someone needs help or encouragement. In such a positive class atmosphere it is Often times it is no longer so important whether I have the seat I actually wanted next to that or that one, because you have a good relationship with almost everyone in the class.

course contribute a lot to promoting such a feeling of togetherness , for example through community-building measures such as class trips or alternating compositions in the formation of working groups. At my former school, every class had so-called “Time for Us” lessons at regular intervals, where the class could deal with the class management or another teacher about the inner workings of the class, conflicts, planned community projects, etc. “

When do the molars come in children?

Tea for the baby: which types are allowed from when?

Tea for the baby: which types are allowed from when?

Baby development: The baby in the 6th month

What is ORGANIC cotton and why is it good and sustainable?

Fashion for men over 50

How to build a DIY barbecue in a few hours