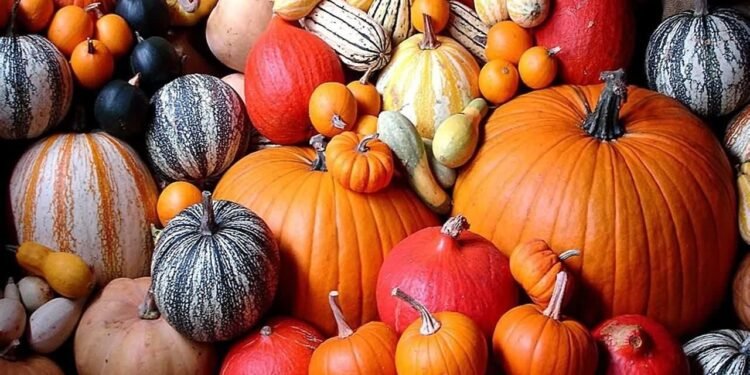 The pumpkin appears en masse in the supermarket, on the market, and in the streets in the autumn. The pumpkin is a crop that has many different types. In most cases, this concerns edible species, but there are also crops that only supply ornamental pumpkins.

The cultivation method of a pumpkin plant, with a little foreknowledge, is actually surprisingly simple. You do need a reasonable piece of land to offer the plant sufficient space during the growth phase. One and a half to two square meters is very pleasant for most pumpkin varieties. There are many different types of pumpkins, varying in taste and color (from orange, yellow to dark green).

Cucurbita is the Latin name for the pumpkin family. There are many different types of pumpkins in this plant family. Most types of these are edible, but the so-called gourds also fall within this group of plants. Gourds are not edible and are also known as ornamental gourds or pumpkins. By the way, the courgette and the passion also belong to this Cucurbita family.

Pumpkins were cultivated in Central and South America as early as 7000 BC. In Europe, the pumpkin is first introduced in the 16th century.

The pumpkin seeds can be put into the ground from the end of April or the beginning of May. Pumpkins can be sown in the open ground, but if the weather is too cold or the soil is too wet, the chances of success are small. There is also a high risk of snail damage when sowing on open ground. Pumpkin plants grown indoors are, by the time they are planted in the ground, a lot larger and therefore less attractive to snails. 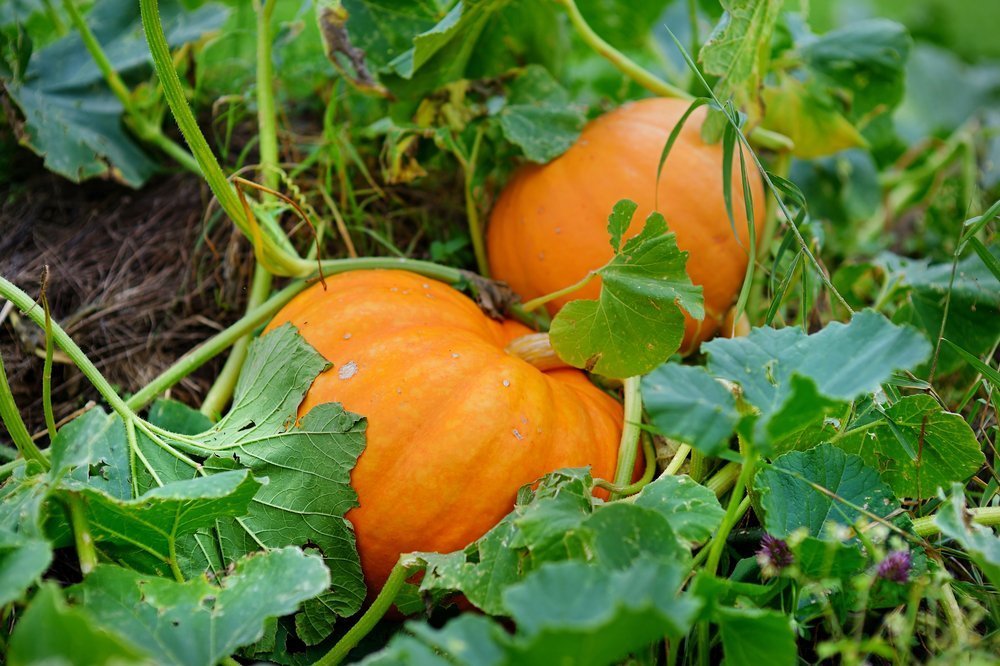 So it is better to pre-sow the pumpkins. The large seeds make it easy to sow. Place one seed, at a depth of 1.5 to 2 centimeters, in a pot. A temperature of about 20°C is ideal for the germination of the seeds. If you sow in the greenhouse, shield the pots from any mice that may be present that love the seeds.

Wait until the plant has at least three true leaves (not counting the germ leaves) before going outside. It is advisable to harden off the plant for a few days, in other words, to let it get used to the colder temperatures outside. Only place the pumpkin plant in the ground when there is no longer a chance of night frost. So after the Ice Saints. An ideal place for a pumpkin plant is on the compost heap.

Characteristics and cultivation method of the pumpkin plant

The pumpkin plant is an annual, not hardy plant, which goes from seed to pumpkin in one season. Depending on the species, they can reach a height of between 10 and 60 centimeters. The tendrils of the plant, on which the fruits will form, can reach a length between two and sometimes ten meters.

These tendrils go in all directions and will climb as soon as they find something to climb up. Despite the heavy fruits, they can also grow in height and ripen. The fruit does not break or tear off. It seems to go completely against the laws of gravity.

If they are near a fence, it is advisable to check the plants regularly during their growth. Any fruit can grow in the fencing and destroy the construction due to the vigor.

A pumpkin plant requires pH-neutral soil with normal moisture. A position in the sun or partial shade is required.

Pumpkin plants have the property that they have quite deep roots. This has the great advantage that they actually do not need extra water during growth. The plant is only watered when it is planted, and maybe again in the following weeks if it is very dry outside.

But as soon as the plant has taken hold, extra watering is no longer necessary and the roots are better off looking for moisture themselves. This will give you a better and healthier plant that can take care of itself completely.

If the fruits start to form, it is advisable to remove excess leaves. Too much leaf around the fruit, of course. By removing this leaf, the fruits catch more sunlight and will develop better. During growth, an extra dose of organic fertilizer is rewarded with larger fruits in the autumn.

The fruits that lie on the soil can possibly be placed on a plank or on a tile so that they will have a nicer shape and the skin will also remain intact. 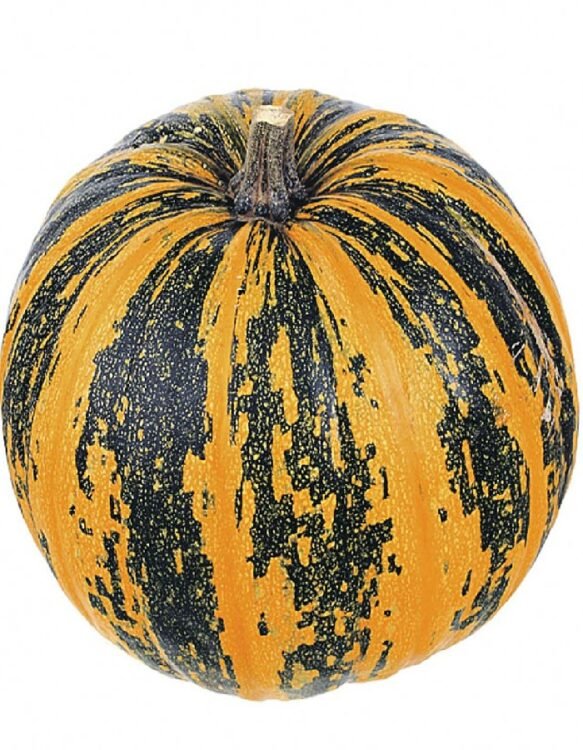 A common occurrence with the large pumpkin plants is the infestation of the leaves with mildew. This phenomenon often occurs from mid-August and is mainly due to the fact that the plants are reaching the end of their strength. An intuitive response might be to immediately remove the affected leaf to prevent worse. You can always do that, but it’s not much use.

The plant is not bothered by the affected leaves and now only focuses on allowing the fruits to ripen properly. All nutrients are sent to the fruit and no longer to the leaf.

When is a pumpkin ripe?

In most crops with fruit, the ripeness can be checked by pushing the flesh in slightly. If the pulp then gives in, this is the sign that it can be harvested/consumed. The skin of a pumpkin is so hard that the flesh is unreachable. We can therefore not test via the skin whether the pulp is already sufficiently ripe. Fortunately,

there is a different, but very simple way to see whether the pumpkin is ripe or fully grown. Once the pumpkin stem begins to wrinkle and turn brown, the fruit has stopped growing and can be harvested. A harvested pumpkin can be stored for months in a cool and dry place.

A pumpkin is not fully ripe until the end of September at the earliest. If in doubt, leave the fruit on the plant for a while. With an unripe, so harvested too early, the flesh is still bland in taste.

Cucurbita maxima are by far the best known of all species. Cucurbita maxima “Atlantic Gaint” is used for the frequently organized pumpkin competitions. The fruit can reach a size of one meter and a weight of up to 70 kilograms. Of course, they don’t always get that big and heavy, 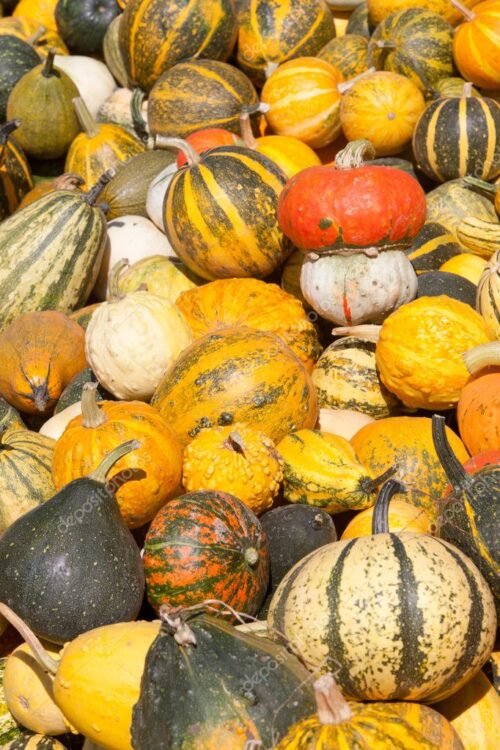 but the fact that it is possible shows that this is an ideal fruit to organize competitions for. The size can vary greatly and is highly dependent on the conditions during the growth phase. The correct cultivation method and fertilization can therefore influence the final size of the fruit.

The fruit is spherical: both the top and the bottom are rounded. The pulp is edible and the pumpkin can be stored for months after harvesting. After the harvest month (October) you often see the fruits in the streets as a decorative element in the garden. The fruit can remain outside until the first frost, after which it is still suitable for consumption.

The Hokkaido squash also referred to as chestnut squash, is one of the most commonly used in cooking. The fruit has yellow/orange flesh and a slightly nutty taste. It is healthy food because the flesh is very rich in vitamins and minerals. 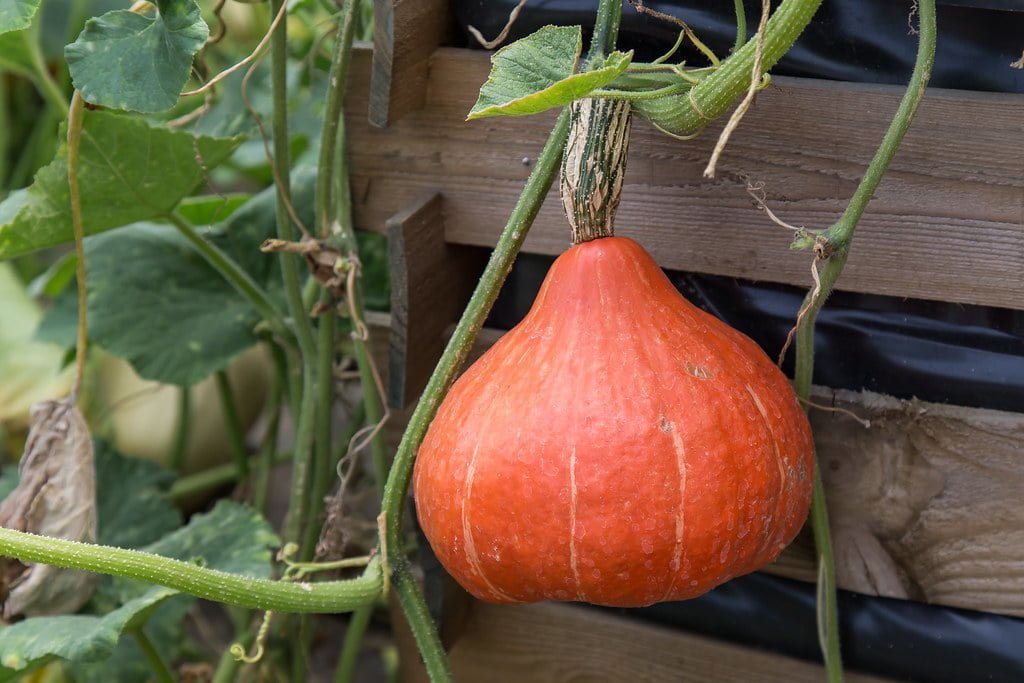 The popularity of this pumpkin may also be explained by the fact that the skin is edible. The apparently hard, impenetrable skin becomes wonderfully soft after preparation and is then easily edible.

The bottle gourd is instantly recognizable by its striking shape. That shape, therefore, bears a lot of resemblance to the shape of a bottle. The flesh of this pumpkin variety is soft, slightly creamy, and nutty in taste. It is a fairly long-lasting pumpkin variety, but shorter than the Cucurbita maxima.

The fruit has a pleasant, not too stiff, and impenetrable skin. The size also makes it a pleasant pumpkin variety. Most of the larger varieties contain so much pulp that they can be eaten many times over. This, therefore, requires careful planning. This is not the case with the bottle gourd. Due to its handy size, it usually has just the right amount for one meal.

Pumpkin in the kitchen

The most commonly used part of this fruit is of course the pulp, which is widely available inside the pumpkin. This pulp is widely used for preparing pumpkin soup, pumpkin pie, and pumpkin bread. It is suitable for preparation in both savory and seet dishes.

But the oilseeds are also suitable for consumption, for example by roasting them. The young, fresh stems and the flower of the pumpkin plant are also edible. The flour can be used as a garnish in a dish or, provided with a dough layer, can be fried. The flower has a fairly neutral, soft taste.