Cats and Children – a Good Team? 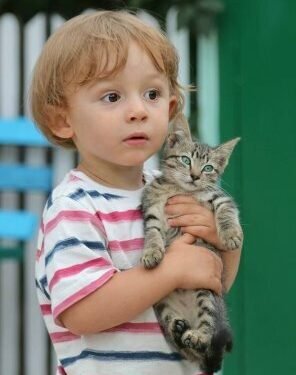 The dream of many children is to have their own pet, and often a cat. Sometimes the kittens look too cute and at the latest when they purr reassuringly, the children are done for. But do cats and children always fit together? What things have to be considered?

Cats often fulfill an important role for children: They are a constant contact, keep secrets to themselves and listen. The purr calms you down and it is a pleasure to watch the animal play. Children have such a meaningful occupation and at the same time learn to be considerate and responsible. In order for this to work, however, there are a few rules to be followed and preliminary considerations to be made.

It is important to distinguish whether the pet or child comes into the family first. Once the cat is there, both will grow up carefully together. If you think about an animal after the child is born, it makes sense to wait until it is three years old. Then the toddler is more mature and can get used to basic rules of interaction. It understands that animals are not toys and have needs of their own.

The younger the children are, the more parents need to keep a close eye on contact with the pet. As a toddler, they can be with the pet for a limited time and under supervision. However, it is always important to assess the extent to which the animal is already understood as an independent living being and its warning signs are recognized.

In preschool age children are better able to learn how to handle pets gently and appropriately. Now they understand the rules better. Explain to them how to stroke the cat, how to pick it up and what the most important body language signals mean. If the child does this well, it can be alone with the animal for a limited period of time.

At this age, children can help with the care of the cat under the supervision of their parents. For example, the dry food can be refilled or the water bowl emptied and replaced. In this way, the child learns that the joy of having a pet also includes work. The Cat Teaser is particularly suitable as a first toy, as it protects against accidental scratches with the long stick in front of the tuft of feathers at the end. Should a scratch occur, it is advisable to disinfect it and show it to the pediatrician if necessary. The germs in the cat’s mouth and the sharp cuts run the risk of inflammation.

As they get older, more and more children should be involved in care and support. Questioning come here, for example, feeding and grooming . Teens can already help keep the litter box clean. However, children under the age of 16 should not be allowed to take care of pets themselves.

The older the child gets, the better the way they interact with animals. Cats are sensitive to mood swings and often have a comforting effect. The positive effects of cats on children have already been proven in many studies. They often work wonders, especially in difficult life situations.

Overall, however, you should always pay attention to whether allergic reactions occur. Cat hair allergies can still develop after a few years. In the event of such a suspicion, the pediatrician should be consulted.

Important rules for dealing with cats

It usually makes sense to set up understandable rules and to refer to them again and again. These could look like this:

If the above rules are observed, coexistence should work well. However, there are also cat breeds that are particularly suitable for children. These are, for example, the following:

With the observance of the above-mentioned rules and a little sensitivity, cats and children become a great team and nothing stands in the way of many wonderful hours with the pet.